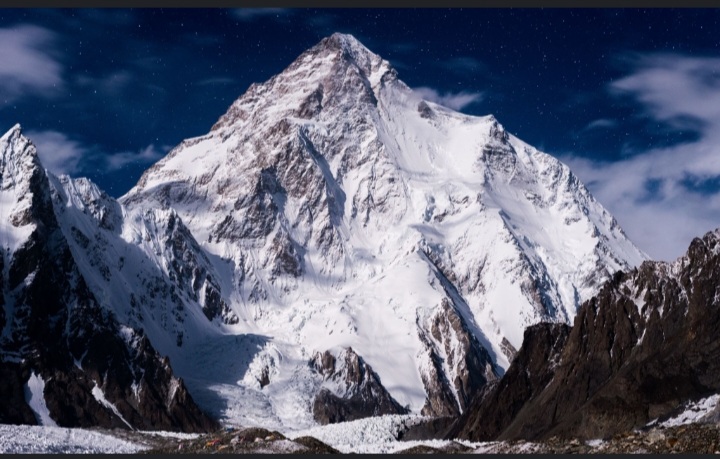 After Mount Everest, which has an elevation of 8,849 meters (29,032.15 ft feet), K2 is the second-highest mountain on Earth at 8,611 meters (28,251.31 feet) above sea level. It is located in the Karakorum mountain range, partially in the Pakistani-administrated Gilgit-Baltistan region of Kashmir, and partially in a Chinese-administrated portion of the Kashmir region that is a part of the Taxkorgan Tajik Autonomous County of Xinjiang.

As a result of George Bell, a climber on the 1953 American expedition, telling reporters that K2 was “a savage mountain that attempts to kill you,” K2 has earned the nickname “Savage Mountain” in popular culture. Out of the five highest mountains in the world, K2 is the deadliest; almost one person in every four who summit the mountain perishes there.

On the 1954 Italian expedition headed by Ardito Desio, climbers Lino Lacedelli and Achilles Compagnoni from Italy became the first to reach the summit. K2 was the last eight-thousander to be climbed in the winter when it was conquered in January 2021 by a group of Nepalese climbers under the direction of Nirmal Purja and Mingma Gyalje Sherpa.

K2 is the only summit over 8,000 meters high whose eastern face has never been scaled. The hottest months of the year, July and August, have virtually always seen ascents; K2’s more northern location makes it more prone to bad and colder weather. Almost all the peak’s ridges have now been used to ascend it. Despite being higher in elevation than Everest, K2 is a more challenging and risky climb because of its more dangerous weather. There have only been 377 persons who have successfully reached the peak as of February 2021. According to the record kept of deaths on eight-thousanders, there have been 91 deaths during attempted climbs.

The Great Trigonometrical Survey of British India utilized a particular notation, which gave rise to the term K2. From Mount Haramukh, about 210 kilometers (130.49 miles) to the south, Thomas Montgomery conducted the first survey of the Karakorum. He sketched the two most notable peaks and gave them the designations K1 and K2, where K stands for Karakorum.

Maps and encyclopedias indicate that K2 is 8,611 meters high (28,251 ft). A Pakistani-Italian expedition to K2 in the summer of 2014, dubbed “K2 60 Years Later,” was planned to mark the 60th anniversary of K2’s first climb. The expedition’s objective included employing satellite navigation to precisely measure the mountain’s height. This expedition measured K2’s height at 8,609.02 meters (28,244.8 ft).