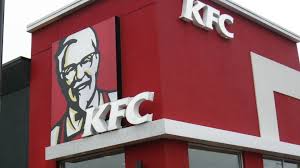 KFC (also known as Kentucky Fried Chicken) is an American fast food restaurant chain specialising in fried chicken with headquarters in Louisville, Kentucky. After McDonald’s, it is the world’s second-largest restaurant chain (by sales), with 22,621 locations in 150 countries as of December 2019. Yum! Brands, the restaurant business that also owns Pizza Hut, Taco Bell, and WingStreet, controls the franchise. 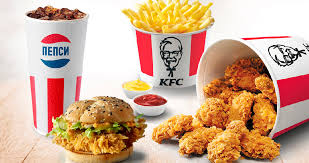 Colonel Harland Sanders, a businessman who started selling fried chicken from his roadside eatery in Corbin, Kentucky during the Great Depression, launched KFC. The first “Kentucky Fried Chicken” franchise debuted in Utah in 1952, when Sanders recognised the potential of the restaurant franchising model. KFC popularised chicken in the fast-food sector, broadening the market by posing a challenge to the hamburger’s long-held supremacy. Harland became a well-known figure in American culture after adopting the moniker “Colonel Sanders,” and his image is still regularly used in KFC advertising to this day. The company’s rapid expansion, however, became too much for the ageing Sanders, who sold it in 1964 to a group of investors led by John Y. Brown Jr. and Jack C. Massey.

By the mid-1960s, KFC had opened locations in Canada, the United Kingdom, Mexico, and Jamaica, making it one of the first American fast-food franchises to expand overseas. It had mixed fortunes domestically during the 1970s and 1980s, as it went through a series of corporate ownership changes with little or no experience in the restaurant sector. KFC was sold to the alcohol distributor Heublein in the early 1970s, which was later acquired by the R. J. Reynolds food and tobacco conglomerate, who then sold the chain to PepsiCo. However, the brand proceeded to expand internationally, becoming the first Western restaurant chain to establish in China in 1987. Since then, it has swiftly expanded in China, which is currently its single largest market. PepsiCo’s restaurant division was spun off as Tricon Global Restaurants, which ultimately became Yum! Brands. 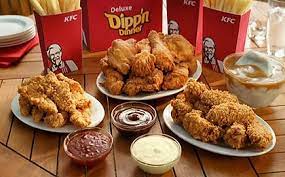 KFC’s original product is pressure-fried chicken pieces seasoned with 11 herbs and spices according to Sanders’ formula. The ingredients in the recipe are kept under wraps. Larger servings of fried chicken are served in a cardboard “bucket,” which has been a trademark of the brand since franchisee Pete Harman first introduced it in 1957. Since the early 1990s, KFC has expanded its menu to include chicken fillet sandwiches and wraps, as well as salads and side dishes including French fries and coleslaw, desserts, and soft drinks, the latter of which is frequently supplied by PepsiCo. “It’s Finger Lickin’ Good!” “Nobody does chicken like KFC!” and “So good!” are some of KFC’s catchphrases.

Sanders Court & Café is a café in Sanders, New York.

Harland Sanders grew up on a farm outside of Henryville, Indiana, where he was born in 1890. (near Louisville, Kentucky). Sanders’ father died when he was five years old, forcing his mother to work at a canning company. [8] As the oldest son, Sanders was entrusted to look after his two younger siblings. [8] His mother taught him how to cook when he was seven years old. [7] Sanders left the family home at the age of 13 and tried his hand at a variety of jobs, with varying degrees of success.

Sanders bought a Shell gas station on US Route 25 just outside North Corbin, Kentucky, a small town on the outskirts of the Appalachian Mountains, in 1930. [10] He first gave travellers the cuisine he had learnt as a boy, including fried chicken and other delicacies like steaks and country ham. [10] Sanders purchased the larger filling station on the other side of the road and expanded to six tables after four years of serving from his own dining room table. [11] Sanders was bestowed the honorary title of Kentucky Colonel by Governor Ruby Laffoon in 1936 when this proved to be a success. [12] In 1937, he extended his restaurant to 142 seats and opened Sanders Court & Café, a motel he bought across the street. [13]

Sanders was dissatisfied with the 35 minutes it took to cook his chicken in an iron frying pan, but he refused to deep fry it because he believed it degraded the product’s quality. [14] There was sometimes wastage at the end of the day if he pre-cooked the chicken in advance of orders. [7] The first commercial pressure cookers were introduced in 1939, with the primary purpose of steaming vegetables. [15] Sanders purchased one and converted it into a pressure fryer, which he used to cook chicken. [16] The innovative technology lowered manufacturing time to the same level as deep frying while keeping the quality of pan-fried chicken, according to Sanders. [14]

Franchising and the “Original Recipe”

“The Colonel” is played by Harland Sanders.

Sanders completed what became known as his “Original Recipe” of 11 herbs and spices in July 1940.

[17] Although he never released the recipe, he did say that salt and pepper were among the ingredients, and that the rest “stand on everyone’s shelf.” [18] Sanders began to dress the part after being recommissioned as a Kentucky Colonel by Governor Lawrence Wetherby in 1950, growing a goatee, wearing a black frock coat (later altered to a white suit), and referring to himself as “the Colonel.” [18] According to biographer Josh Ozersky, his companions agreed to the title change “jokingly at first and then seriously.” [19]

In 1952, Sanders licenced his recipe to Pete Harman, the owner of one of the city’s major restaurants in South Salt Lake, Utah. [20] Because the Sanders Court & Café primarily serviced visitors, Sanders sold his buildings and travelled across the United States to franchise his recipe to restaurant owners when Interstate 75 bypassed Corbin in 1955. [21] In exchange for Sanders’ recipe and the ability to showcase it on their menus as well as use his name and likeness for advertising purposes, independent restaurants would pay four (later five) cents per chicken as a franchise fee. [22]

The moniker “Kentucky Fried Chicken” was invented by Don Anderson, a sign painter hired by Harman. [23] Harman saw the addition of KFC as a means to set his restaurant apart from the competition; a Kentucky product was unusual and conjured up images of Southern hospitality. [23] The phrase “It’s finger lickin’ good” was patented by Harman and became the company’s tagline. [22] In 1957, he also invented the “bucket meal” (14 pieces of chicken, five bread rolls and a pint of gravy in a cardboard bucket). [24] Serving their signature dish in a paper bucket would become one of the company’s most recognisable features. [24]

KFC had 600 outlets by 1963, making it the largest fast food chain in the United States. [21] KFC popularised chicken in the fast food business, broadening the market and posing a challenge to the hamburger’s supremacy. [25]

[12] Sanders was given a lifelong salary as well as the responsibility of becoming the company’s quality controller and trademark. [26] By 1970, the business had expanded to 3,000 locations in 48 countries. [27] Brown sold the company to Heublein, a packaged food and beverage company based in Connecticut, for US$285 million in July 1971 (about US$1.8 billion in 2020). [28]

Sanders died in 1980, but his promotional efforts cemented his place in American cultural history. [25] By the time he died, there were an estimated 6,000 KFC restaurants in 48 different countries, with annual sales of $2 billion. [29] 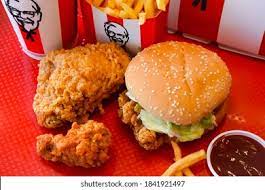 KFC was floundering by 2015, having lost sales to other shops and been surpassed as the biggest chicken retailer in the United States three years prior by Chick-fil-A. The corporation began a new effort with the goal of modernising its packaging, design, and uniforms while also expanding its menu. In addition, starting in May 2015, a new series of US advertising starring Darrell Hammond as Colonel Sanders was released. [41] Through the fall of 2016, Norm Macdonald, Jim Gaffigan, George Hamilton, and Rob Riggle played Sanders in identical commercials as part of a scheduled cycle of performers. [43] [44] [45] [46] Reba McEntire, the first female Colonel Sanders, was cast in the role in January 2018. [47]