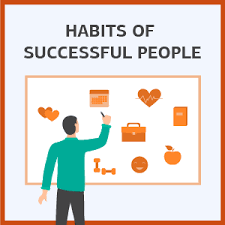 The term “habit” usually refers to a person’s typical manner of acting or a propensity that they have developed through time, such as “excellent eating habits.”

Habit, on the other hand, originally meant “clothes” and had nothing to do with the activities that a person performs on a daily basis. Only expressions like “nun’s habit,” “monk’s habit,” and “riding habit” retain this meaning today (clothes worn for horseback riding).Habit, like so many other words that originated in English in the decades after the Norman Conquest, is a French term. Habits is the current French term meaning clothing (pronounced ah-bee). Habit evolved from “clothes” to “clothing for a certain profession or function” to “bearing, conduct, and behaviour” in English.” (The genesis of the phrase reminds me of the old adage “clothing make the man.”) “which claims that how we dress reflects our personality.)Habit evolved from “what one wears” to “how one conducts oneself,” referring to appearance (“a man of fleshy habit”) and mental makeup (“a philosophical habit”) until coming to imply recurrent action in English after many centuries: “a behaviour pattern developed by continuous repetition.”

The use of the term “habit” to refer to drug addiction dates back to the 19th century, when it was first used to describe opium addiction.

Even though “clothing” is the earliest English meaning of habit, the word’s ultimate Latin root, habitus, didn’t have that meaning at first. “State of being” or “condition” was the original Latin meaning of the term.

Habitus changed from meaning “condition” to “how one conducts oneself” to “clothes” in Latin—our most prevalent usage of the word today, “acquired way of behaviour,” didn’t exist. It was a historical accident that it was converted into English in exactly the opposite sequence; the order of meanings absorbed from one language to another seldom represents a logical progression. Meaning is developed through usage and force of habit, as it is with all languages.

Habit makes over 95 percent of your personal behavioural qualities, and it ultimately determines your academic and personal success. To achieve the desired outcome in future competitive tests, you must adopt these ten habits of successful students.

Why do some kids excel academically while others struggle to achieve decent grades despite their efforts? The difference in habit between two students is the solution. Everyone has the capacity and ability to succeed; yet, it is a student’s habit that makes all the difference. No matter how hard you study, it’s your habit that determines your competitive exam success.

1. Organize yourself and set plans.

Make a plan first, whether you’re studying for an exam or working on an assignment. A study plan will assist you in studying in a more efficient and structured manner. Aside from that, careful planning will keep you up to date on your study schedule. Only by making a plan can you keep track of your studies for the week, month, and year.

Keep things simple and avoid overdoing it because it will cause more harm than benefit. You can’t accomplish everything all at once. As a result, when you’re studying, just concentrate on it and don’t be sidetracked by other things like friends, parties, or other unrelated tasks.

You should not study for long periods of time because it will make you unproductive and lethargic. Make a study plan for each section of the syllabus by breaking it down into smaller chunks. This will not only help you learn more effectively, but it will also keep you interested in the topics.

If you believe you can study for long periods of time without sleeping at night, you are completely wrong. You are merely wasting your time by doing so. Sleeping for at least 7 hours might improve your memory and help you focus better on your schoolwork.

It’s critical to plan out your daily tasks and then study accordingly. This will save you time while also allowing you to prepare for the next day. Every good student makes it a habit to plan ahead of time before studying.This will improve your concentration and allow you to study more effectively.

6. Keep track of your notes.

Another great student’s practise is to never forget to take notes when studying. Taking regular notes improves your memory and allows you to revise things without difficulty. When you sit down to study, start taking notes.

7. Concentrate on your studies

Don’t be sidetracked by what’s going on around you; instead, concentrate on your studies. Smart students keep their study rooms clutter-free and turn off their phones when studying. To achieve good outcomes, continue to practise this habit and focus on your academics.

Keep your study area neat and tidy at all times. To study in peace, you’ll need the ideal setting. Studying with a study table and chair will improve your concentration and help you learn more effectively.

When you’ve finished a topic and want to review it, make sure to talk about it with your peers who are serious about their academics. Discussions will assist you in getting the fundamentals correct and revising properly.

Never be hesitant to ask questions. If you have any doubts, don’t be afraid to contact your friends, professors, or experts for help. This will dispel your uncertainties and assist you in accomplishing your goals.