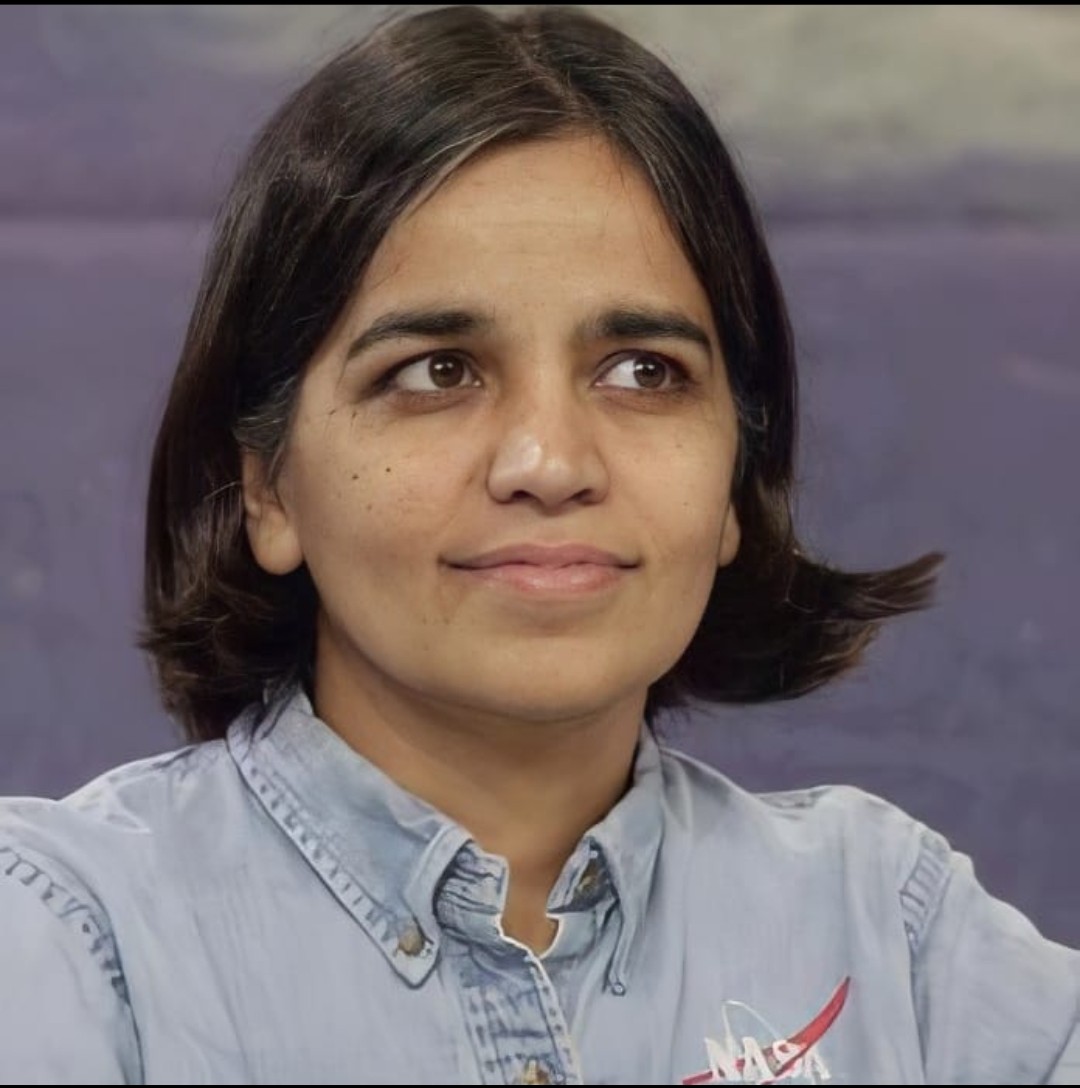 “That’s one small step for a man, one giant leap for mankind” said Neil Armstrong, stepping on to the moon’s surface on 21st July 1969.

Kalpana Chawla dreamt of even as a child. May be she was rightly named Kalpana Well, when she stepped into space, not ‘imagination.’

Even as a young girl she preferred to sketch and paint airplanes than dress up her Barbie dolls. A close friend remembers that Chawla often spoke about travelling to Mars as being her greatest ambition. Not only did she dare to dream but she also went the distance to fulfil her motto, ‘ Follow your dreams ‘. She went on to clock an incredible 760 hours in space , travelling 10.4 million km, as many as 252 times around the earth. “I could then see my reflection in the window and in the retina of my eye the whole earth and sky could be seen reflected so I called all the crew members one by one and they all saw it and everybody said. Oh, wow.””

Kalpana Chawla was born on the 1st of July 1961, into a middle-class family, the youngest of four siblings. She maintained a brilliant academic record throughout school. She took part in almost everything, from athletic to dance and science modelling.

She graduated from Tagore school, Karnal, in 1976. She went on to pursue her Bachelor of Science Degree in Aeronautical engineering through Punjab Engineering College. She happened to be the only girl in the aeronautics branch. Though her family initially resisted her decision to pursue a career in aeronautics, they finally relented, knowing her determined nature. This led on to a Master of Science degree in Aerospace engineering from Texas University in 1984, again after having to fight it out with her father who was very reluctant. Finally a mere five days before the last date for admissions closed, he relented on condition that her brother, Sanjay, accompany her to the States. Then followed her Doctorate of Philosophy in Aerospace engineering from Colorado University in 1988.

Chawla enjoyed flying, hiking, backpacking and reading. Her passion for flying began very early in life. Even when she was in school, she drew airplanes in drawing competitions and made models of the universe and constellations for geography projects. Her friends remember how she incessantly talked about designing and flying planes, “It was obvious that she wanted to do something special and she

would achieve it.” While she was pursuing her engineering, her brother Sanjay bud enrolled himself in the karnal flying school. During a break from studies, Chawla accompanied her brother to the flight school, but the authorities wanted a written consent from her guardian before they would let her fly. Her father refused. It was then that Chawla got some valuable advice from her brother that she remembered all through her life: Everyone lights their (hin) own battles,

It was this advice which encouraged her to later earn her pilot’s license for airplanes and gliders. She enjoyed flying acrobatic and tail – wheel airplanes. In fact, her inspiration to take up flying was JRD Tata who flew the first mail flights in India.

As a first-year student at Punjab Engineering College, she had surprised everyone by presenting a paper on time lapse in space. As Secretary of the aero astro club of the same college, she had arranged for a screening of the movie: ‘ Those magnificent men in their flying machines. Her path to the ‘ Milky Way ‘ was laid then.

She had a single-minded determination to be an astronaut. Where did this grit com from? Surely from the steely resolve of he father, Banarsi Dass Chawla who had to flee Pakistan during Partition. He had tried his hand at odd jobs, and having practically no money to invest he had succeeded in building a thriving tyre business from scratch.

Rakesh Sharma, the first Indian to go into space, in the guest column of a cover story in ‘ The Week ‘, featuring Kalpana Chawla, said, “Often I have been asked if, as a child, I had ever dreamt of going into space. I answered truthfully in the negative, explaining that India never had a manned space programme, and so dreaming about it would have been futile. Kalpana, on the other hand, was a small-town girl who dreamt big and had the self-belief to chase that dream. She chased it half way across the globe, caught up with it and then, lived it. That was the difference between us.”

Don Wilson, her thesis guide at the University of Texas, Arlington, recalls her as a “quiet and shy girl who was intimidated by her surroundings.” But this was not for long. She adapted well, showing a burning desire to be an astronaut. “She just refused to take ‘no’ for an answer. And she was also an amazingly good student,” he was to say later.

In 1988, Kalpana Chawla started work at NASA Ames Research Center. Meanwhile she married Jean-Pierre Harrison, a flight instructor, drawn towards him probably because of her fascination for flying. In 1993, she joined Overset Methods Inc., Los Altos, California, as Vice President and Research Scientist. In December 1994, she was selected by NASA out of 2962 applicants as an astronaut candidate in the 15th group of astronauts. According to NASA, her academic accomplishments, intense physical fitness and experience as a pilot made her a natural choice. She reported to the Johnson Space Center in March 1995. Her path to the ‘Milky Way’ was paved now. She had to undergo a year’s rigorous training and evaluation. The training was so arduous that it could deter an average human being, but not Chawla. It was a training, which included experiencing the pull of gravity, which would increase the pulse rate from 72 to 102 within seconds a training where every movement could be a discovery of pain. The training required immense levels of fitness.

In 1996, her dream became true. She started off on her path to the ‘Milky Way’. She was assigned as mission specialist of STS – 87 Columbia, for a 16-day mission between November 19 to December 5, 1997, as part of a six astronaut crew. She became the first Indian or Indian-American to fly in the US space shuttle. She made history by becoming the first Indian born woman to achieve this feat, for she had sought American citizenship in the early 90’s.

Though her dream became true, she was blamed for making mistakes that sent a science satellite tumbling out of control. Other astronauts went on a space walk to capture it. However a post-flight NASA evaluation absolved her of blame, rating her a ‘ terrific astronaut. ‘

Following her first space flight, in 1997, Chawla said, “The Ganges valley looked majestic, mind-boggling. Africa looked like a desert and the Nile a vein in it.”

She said sunrises and sunsets defined her experience in space. “It is almost as if everything is in fast forward. Then the moon races away from us and is lost in the glow of the earth’s curvature.”

She yearned for a second chance. The chance came in 2000, when she was assigned to the crew of STS – 107 scheduled for launch in 2003. Once again she had succeeded. It was not only good fortune, but also her having worked very, very hard.

On being selected again, she said, “Just looking at Earth, looking at the stars during the night part of Earth; just looking at our planet roll by and the speed at which it goes by and the awe that it inspires, just so many such good thoughts came to your mind when you see all that,” “Doing it again is like living a dream, a good dream, once again.”

But this time it was to be her eternal voyage. She became one with the space that she dared to dream about, and yet still dared to explore.

The 16-day flight which began on January 16th 2003 was a dedicated science and research mission. The crew successfully conducted 80 experiments. On February 1st 2003, a breezy blue day over Florida, during entry, the space shuttle exploded into a ball of fire, sixteen minutes prior to scheduled landing, Kalpana Chawla and the other six crew member died an unfortunate death leaving the whole world mourning.

She had said after her first space flight, that as the shuttle repeatedly passed over India, especially New Delhi, she pointed it out to the other crew members and said, “I lived near there”. Now each time we look up into the sky, it’s our turn to say, “She’s up there”.

Kalpana Chawla carved an identity for herself in an otherwise men’s domain. She will always inspire many young women as she has paved the way for them to dream to think beyond horizons and reach for the stars. Her passion for space exploration has made her an inspiration and an icon to every Indian girl.

In the last interview to the press, Chawla said, ” I was not born for one come. The whole world is my native land.’ So said Seneca, the philosopher. I have felt that connection for the Earth for as long as I can remember. ‘ And not just for Earth, but the whole universe. In summers, while growing up in India, we often slept in the courtyard under the stars. We gazed dreamily at the Milky Way, and once in a while caught me shooting stars. Times like those gave me the opportunity to wonder and ask all those very basic questions. That sense of awe for the heavens started there. The family and the surrounding community were mostly folks who had come to the area after Partition, most of them without many possessions. You couldn’t love by working hard and everyone seemed to follow that rule. It helped instil the notion that no matter what the circumstances, you could indeed follow your dreams.”

In the same interview, her message to Indian children was,” the journey matters as much as the goal. Listen to the sounds of nature.Take good care of our fragile planet.”

When asked why anybody would want to climb Mt. Everest, Sir Edmund Hillary replied, “Because it is there!”

To all the persons and Chawla who want to explore “because it is there,” in the generations to come, it is wishing bon voyage!