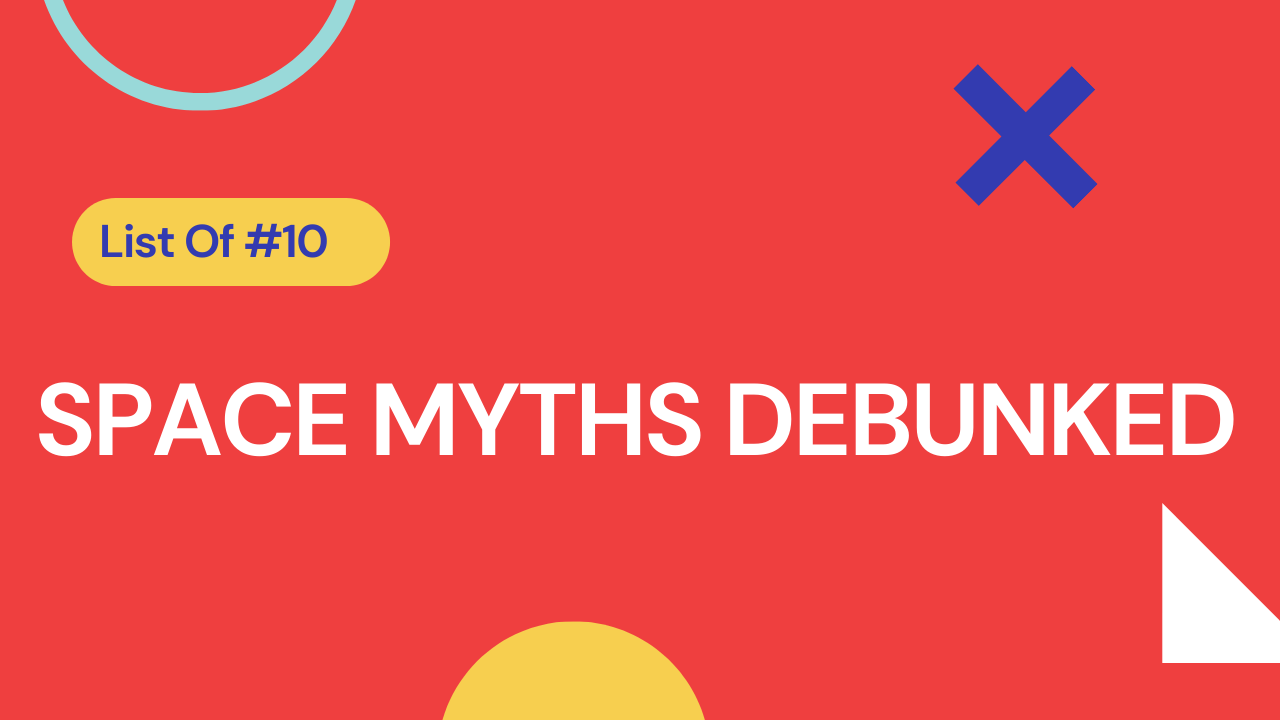 Is our space hot or cold?

Comment your answer immediately down below & you’ll find the answer at the end of this article.

Ok, you have heard something like this, Mercury which is very near to the sun is so hot.

And planets that are going farther from the sun become colder.

Also, our Earth revolves around the sun in elliptical orbits.

When the distance between the Sun & the Earth becomes smaller, we experience summer.

When the distance between the Sun & the Earth becomes longer we experience winter.

NASA spent a lot of money on space pens, but the Soviet Union smartly used pencils in space.

Some rich people buy small islands for their personal use. Likewise, we can name stars on our names too.

If you have thought this information to be true, then I’m sorry, I would say these are all myths.

Then what are those truths?

So, now we are going to see about some space myths debunked.

Man have thought of buying a star-like buying an island. Unfortunately, we can’t buy a star, but many we can name a star.

Many private agencies claim that they can buy land on the moon & name a star.

If you want to name something after you in space, then spot a comet, you can name it with your name.

Gennadiy Borisov found a comet & it was named as 21/Borisov comet.

We have already known the cold war between the USA & the Soviet Union.

Here, this space pen is so important. NASA was investing much money in space pens.

If the tip of the pencil breaks it would cause harm. The pencil is made up of carbon & the spacecraft contains oxygen.

Here pencil may catch fire easily, so it is not preferred much. So both countries were working on space pens.

Fisher pen Inc designed a mechanical pencil for NASA which costs around $128.

NASA was using it silently initially, but when the public came to know about the price, so people opposed it.

NASA then dropped that pen & asked that company to make another alternate pen.

So that company made a pen named AG7 – an antigravity space pen. This pen costs around $3.

How these pen works are in their cartridge Nitrogen is kept at a high pressure So that it pushes the ink down through the nib at around 30 pounds per square inch.

The pressure is pushed towards the nib, even in any direction. Due to pressurized nitrogen, the ink doesn’t get vaporized.

The ink used here is specially made to withstand all temperatures.

This pen is not only being used in spacecraft but also in aircraft too.

Not only NASA we too can buy this space pen on Amazon, it is priced at $50.

There is no relation between the distance & the temperature of Earth.

The temperature of the Earth is based on the atmosphere.

Earth is inclined at an axis of 23.5 degrees. This inclination makes the Sun’s radiation enter into Earth at various angles & be the reason for temperature.

When the radiation is straight to Earth then there is summer.

When the radiation is a slant to Earth then there is winter.

In that you have asked, how do you say Earth is spherical?

If you spin atop it will have a top & bottom right?

Similarly, with that axis, we can say that Earth is inclined at 23.5 degrees.

The next myth is that only the Great Wall of China is visible from space.

But to know this we need to know what is space first.

Right above 100 kilometers from sea level, there is Karman Line.

From that Karman Line, space is starting.

From there if we take any satellite images we can see the Great Wall of China & also other man-made structures like New York, London are visible from space.

Bright lights of major cities at night are visible from space.

The pyramids of Giza, Egypt.,

The Kennecott Copper Mine, USA

The Palm Island at Dubai,

The Greenhouses at Almeria, Spain

likewise, all these massive structures can be visible from space.

But in space there are no particles, there is an only vacuum. So we cant tell about temperature. But how they tell is.,

The Sun’s radiation must be transferred to something to be measured.

For example, if it is transferred to Moon or ISS, the temperature can be measured there.

In astronauts how much temperature is there also can be measured.

This Space station is orbiting around Earth continuously & when it is orbiting on the opposite side of the sun then the temperature would be around -156 degrees Celcius.

And in the Region of Sun side of Earth, the temperature is 120 degrees Celcius.

So if an object observes are emits then only we can measure temperature.

So there are no objects in space & so no temperature in space.

Mercury is not the hottest planet in the Solar system.

Because the atmosphere only determines the temperature of the planet, not the Sun.

The atmosphere only holds the temperature.

Mercury doesn’t have an atmosphere so it has only 420 degrees Celcius temperature.

But Venus has a temperature of 462 degrees. Venus has a denser atmosphere with more carbon dioxide & nitrogen in it.

So because of this, it holds more heat & temperature is also high.

Is Sun yellow in color? Sun is not yellow.

The colors of the Sun, Sky all are based on the scattering of light in the atmosphere.

The 4500 degrees Celcius hot sun is not yellow, but it’s white.

Whatever we see is an optical illusion right from the color of Sky, Sun, etc.,

This is because of the scattering of light in the atmosphere.

The other most asked question is how the sun is burning without oxygen?

For a fire to happen oxygen is needed.

Actually, in Sun, there is no burning occurring, nuclear fusion is happening. It is said as a thermonuclear reaction.

Sun is not a fireball it is a large nuclear power plant. Sun doesn’t need any oxygen.

Earth is not a sphere. Then you may ask is it a Flat one? Earth is Geoid

The Equator of the Earth is slightly enlarged & the poles are somewhat flatter. It is not perfectly round.

It is somewhat similar to potatoes, with bumps and not perfectly round.

When seen from a distance planets look perfectly spherical, but actually, they all are geoid.

The geoid is a shape similar to an uneven sphere with many bumps in it. So, Earth is Geoid in shape.

At night we can see an infinite number of stars is a myth.

We cant see an infinite number of stars, we can see only around 3000 stars from Earth with our naked eyes.

Then what are the remaining things that we see in the sky are like planets, galaxies, satellites, etc.,

In childhood, we have seen the morning star, which is Venus planet.

Like the proverb “All the glitters is not gold”,

“All the glitters in the sky are not stars”.

Due to bad weather conditions, it is not feasible now.

I hope you enjoyed reading this article. If you have any questions please comment down below.