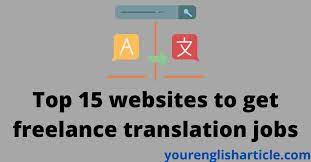 Let’s start with the obvious: If you are to build a strong personal brand, nothing beats having a website of your own. There are plenty of free or reasonably priced WordPress themes to give it a professional look and feel. Keep in mind that your website won’t promote itself, so if that’s the way you want to go, be ready to work on your online presence in social media networks and groups. Also, note that this approach works mostly for attracting direct clients — agencies don’t really care how good you are at social media.

(Side note: When working with direct clients, you’re likely to run into difficulties when receiving payments from across the globe. Read or scroll down to the very end of #15 below to find out what you can do to get paid easily.)

The next obvious way is to sign up with translation agencies, aka LSPs. The process is usually more or less the same: You send your CV, if the agency is interested they send you a test assignment, and, if they like it, add you to their pool of translators. You never really know if you’re going to get an actual assignment — but the more respectable the companies you focus on, the higher your chances. You might want to check out this list of the world’s top 100 LSPs.

These are online platforms that are basically agencies concealed behind a fancy UI. This helps them attract tech-savvier customers, who might not want to have to deal with too much human interaction when they need to translate something. Although the overall experience for you as a translator is similar to that with traditional agencies, it might be more automated. For example, you might do the tests and assignments right on the website instead of sending and receiving files manually.

Let’s look at and compare the five most popular online agencies. 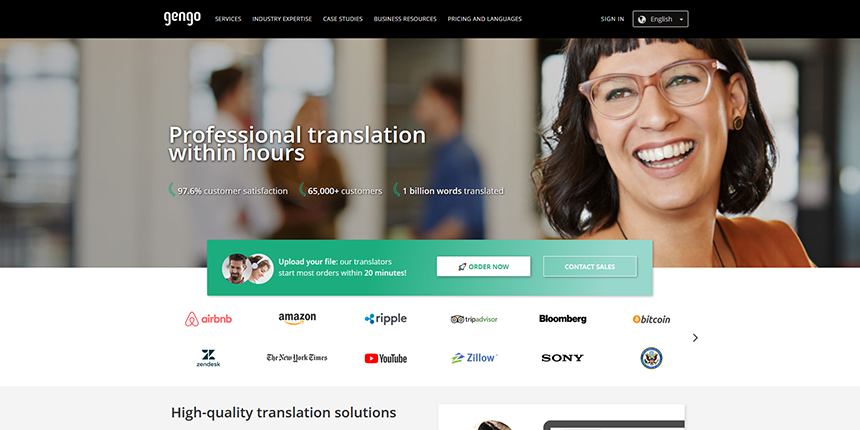 Currently the most popular among all online agencies, Gengo has set the tone for the look and feel of such platforms. The agency provides educational resources for translators, detailed style guides for some languages, and a practical online platform where you do the translations. Some languages, most notably Japanese, have a steady flow of orders, so if you translate from or to these, you’re unlikely to stay without work for long. On the downside, there are fewer orders for other languages, so there’s always a “click race” to snatch them up as the first person to apply gets the job. The rates are pretty modest, especially at the “Standard” level. 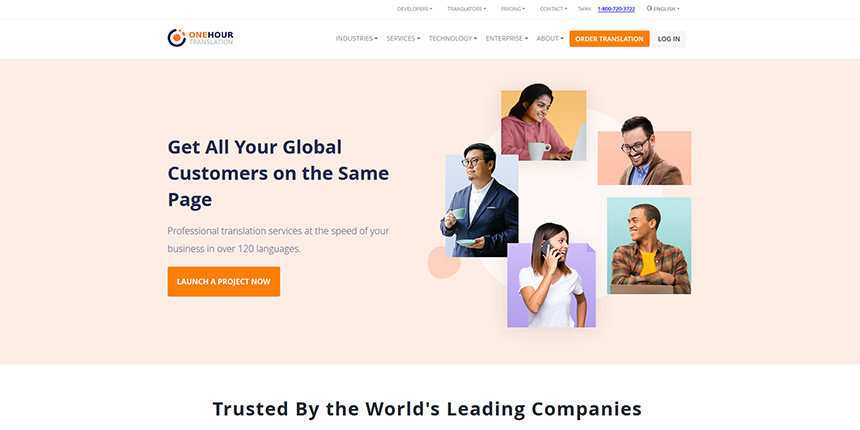 OHT is perhaps the oldest among the successful, and the most successful among the old online translation agencies. Unfortunately, its age shows: The agency’s website has a distinctive “2000s” feel to it, and that likely drives the “hipper” customers away. On the upside, OHT works closely with its freelancers, introducing a gamified progression system, which makes growth within it fun regardless of the financial reward. Speaking of which, alas, the money is not great — although it gets somewhat better in the higher “tiers”. 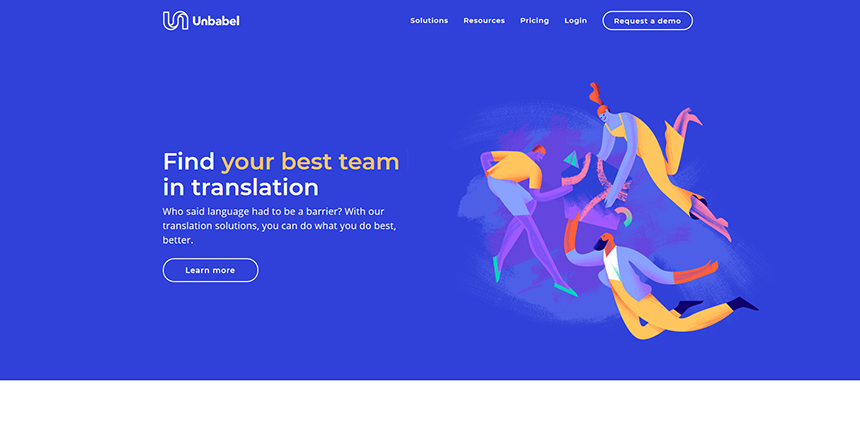 If there’s a polarizing translation service, Unbabel is it. Built entirely on a machine translation post-editing flow, it makes customers rejoice in how cheap it is and linguists shudder at the resulting quality. From a translator’s point of view, working for Unbabel is an unusual experience, partly because the content is mostly simple and partly because it is the only popular service that pays by the hour, not by the word — which has its upsides and downsides. Rates vary from unbelievably low to pretty good, depending on the language pair and perhaps some other factors. 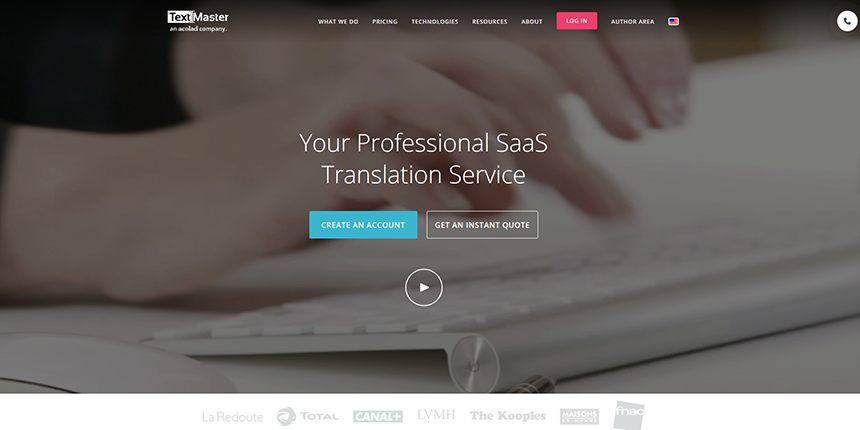 Despite the boring name, TextMaster is perhaps the “littest” on the list. Its website features strong “millennial-friendly” features such as being people-centric and explaining complex things in simple words (my own guilty pleasure). Also, from a brief study of the web, it seems TextMaster freelancers really love working for it. The agency also claims to focus on the quality of translations, describing its selection process in detail and boasting that only 25% of freelance applicants get admitted. This might be good or bad, depending on where you are in your career and skills — especially if you couple that with the fact that jobs don’t seem to come in abundance.

With that, let’s go on to the next kind of marketplaces—

If by now you’re tired of looking at fancy websites, rejoice: We now explore some “old-style” marketplaces (with one exception). There’s not much automation, if any, and some look like they come straight out of the pre-dot-com-bubble era — but it may be just what you need. Note that if the websites in the previous section were mostly targeted at direct clients, this is a domain where agencies reign — so decide whether you want to work with them based on your preferences. 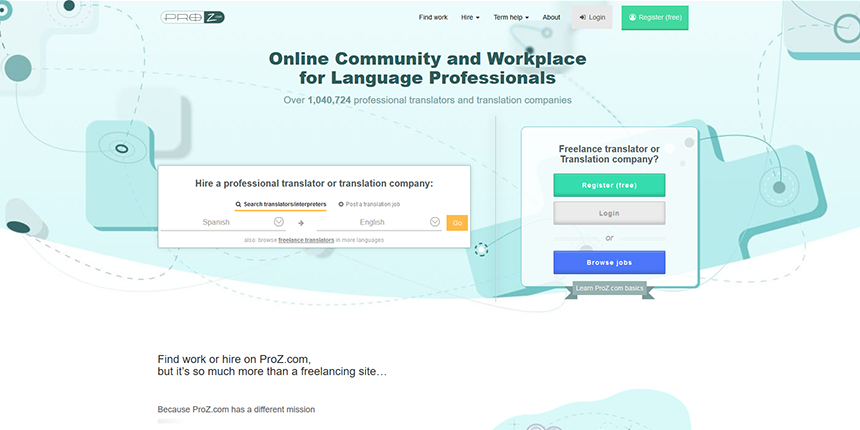 Some would consider it a blasphemy that the almighty ProZ only takes the eighth spot here, and in some ways it is. If there is one place that could be considered a “home for all translators and translation agencies,” ProZ is it. The website has no automation — basically, translators just post their profiles, customers post their jobs, and somehow the two get connected. There are also added features on ProZ such as forums and contests that help translators build their presence among both colleagues and clients: “Star” translators — or, rather, translators with star profiles — can enjoy a steady inflow of orders. Others will see some, too — if for the sheer volume of traffic the website enjoys, — but be ready to decline (or accept) a lot of job offers for peanuts before you receive something worth considering. 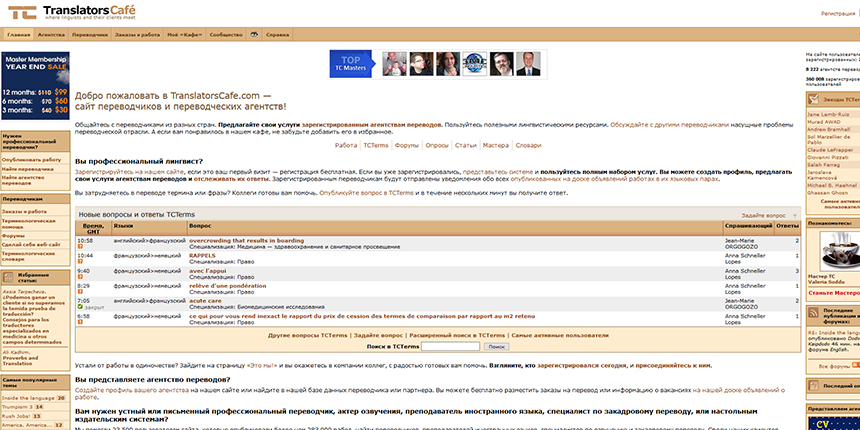 The Pepsi of the translation industry, TranslatorCafe is mostly all the same things as ProZ, but at a smaller scale. Downside: Smaller community, fewer jobs: Upside: More of a “family feeling” and fewer trashy jobs. The absence of a LinkedIn page (no, this is not it) speaks volumes about the level of automation and future-savviness, too. 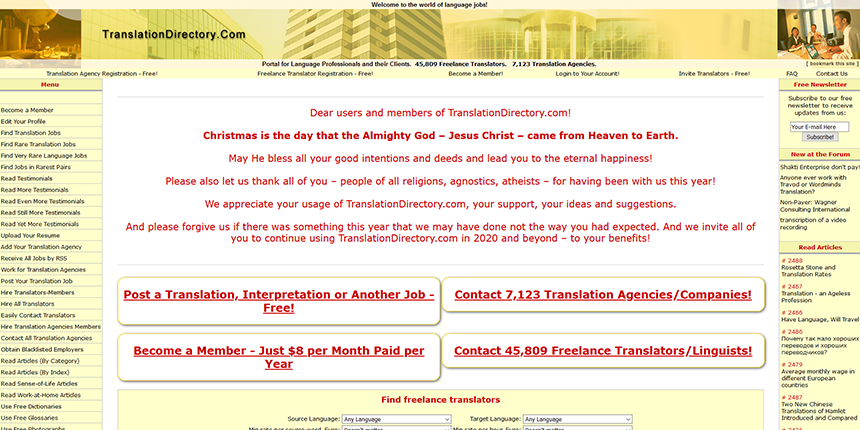 If you thought TranslatorsCafe’s website was outdated, you have to check this one out. Amazingly, the website manages to garner 130,000 visits per month, so if you set up a profile, there is a chance someone will contact you for something. The website doesn’t work the other way around — i.e. you cannot look for jobs, — which might be a blessing in disguise. 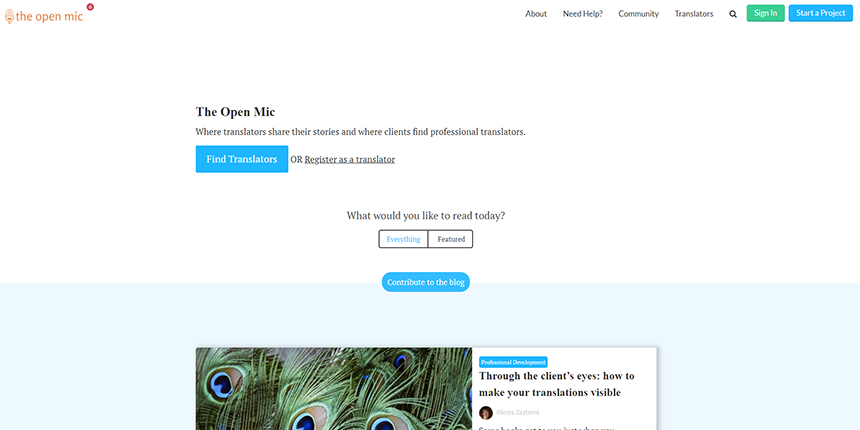 A breath of fresh air in the “old-school” department, TheOpenMic is actually a relatively new endeavor by translation celebrity (if that’s a thing) and enthusiast Dmitry Kornyukhov. The website started as a talking spot — think Facebook for translators — but has since tried to re-focus on bringing actual customers to the platform. Time will show if that bears any fruit, but you’ll likely enjoy the community part of it anyway.

Okay, we’re almost 75% through. Before we get to the headliner, let’s take a look at some—

Believe it or not, translation is not the only “freelanceable” job out there, so there are quite a few SaaS platforms aimed at everyone from designers and programmers to plumbers, wedding singers, and, well, translators. A word of warning is that since they don’t work exclusively with translators, they might not get how the translation industry works. Nor might their customers. So, if you decide to go for any of those options — why not, after all? — be ready to explain a lot to your customers, who will in many cases be individuals, not companies, with every consequence that follows. 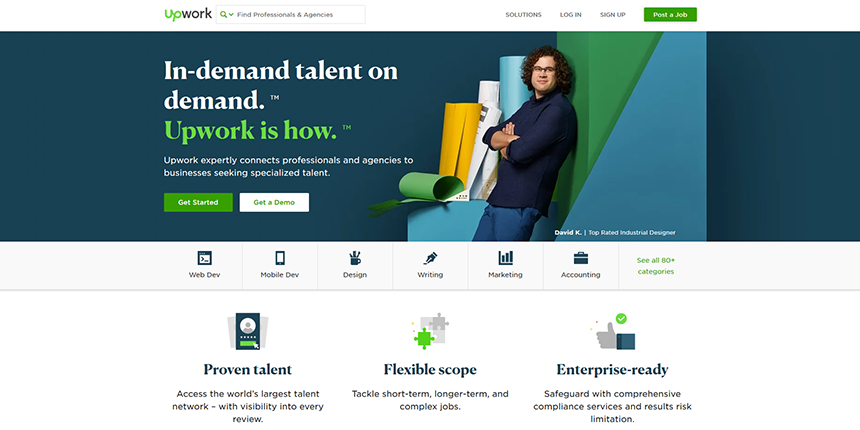 The ultimate veteran of all things freelancing, Upwork traces its roots back to 1998! Today it’s the default go-to for anyone starting to freelance in any profession, although Fiverr — see below — has made its life much harder. Given the website’s popularity and the number of translators already on the website, unsuccessful bidding for projects is the norm and might discourage even the most enthusiastic freelancer. 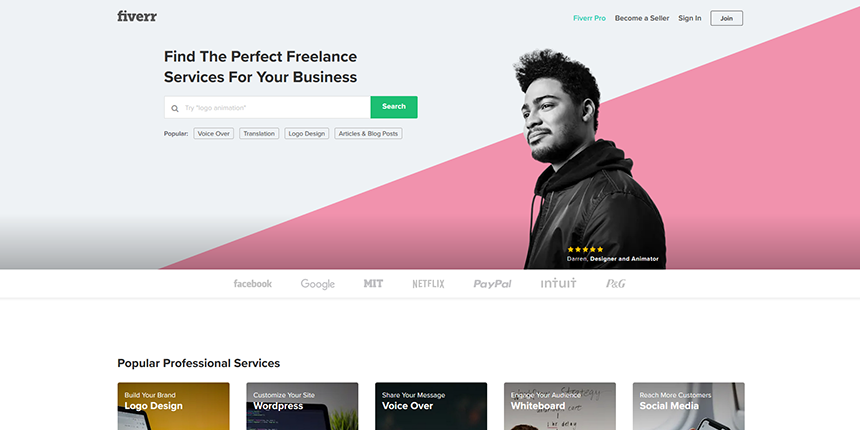 Initially a place where anyone can get anything for just five dollars, Fiverr quickly turned into an all-purpose marketplace for all price ranges and a paragon of the “gigonomy”. Most customers are individuals, who, unfortunately, have an even larger tendency to underestimate the effort it takes to translate than businesses. If you go for it, be ready to undercharge. On the upside, you don’t need to bid for projects here — it works the other way around. So if you do manage to bag a few projects at low rates, your profile will likely climb up the search results, opening up opportunities for more lucrative orders. 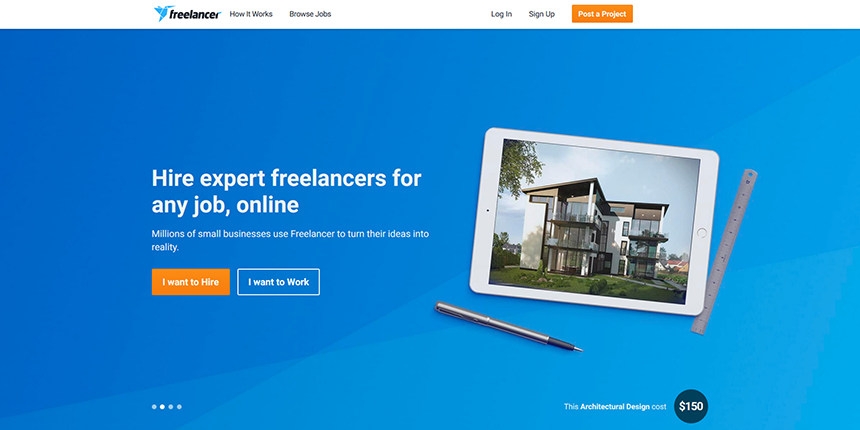 Another behemoth of all-purpose freelancing, Freelancer.com undertook a strategy of acquiring smaller marketplaces. This, and a top but bland brand name, correlates well with the overall soulless feeling of the platform. Also, there doesn’t seem to be many translation jobs, with just 70 posted in 24 hours at the time of writing. On top of that, most jobs have 20+ bids, so be ready to master the good old trade of price wars if you decide to try your luck here. 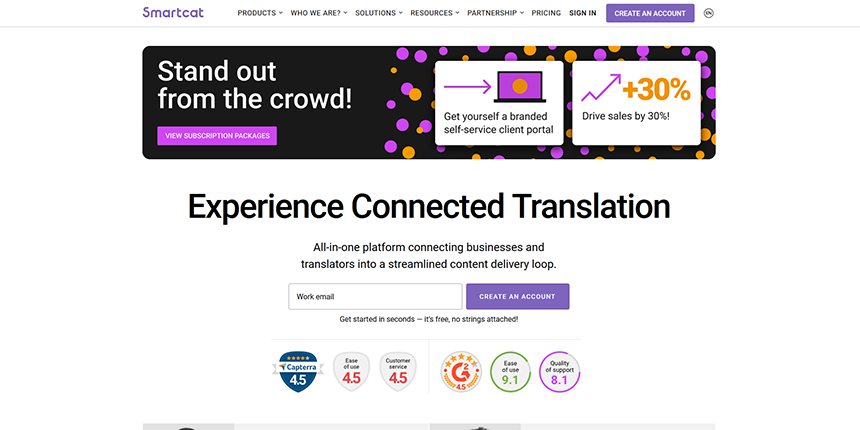 Some might say I left Smartcat until last because I work here,̶ ̶̶a̶n̶d̶ ̶t̶h̶e̶y̶ ̶w̶o̶u̶l̶d̶n̶’̶t̶ ̶b̶e̶ ̶t̶o̶t̶a̶l̶l̶y̶ ̶w̶r̶o̶n̶g̶. But the real reason is that it is so many things that it can’t be classified under any other title. It is not an agency, although it is the main business tool for thousands of agencies. It is not an all-purpose platform, and it is definitely not a computerized craigslist.

Of the many things that Smartcat provides, the two that matter most for translators are the (free!) CAT tool and the freelancer marketplace. The logic of the platform is that you use the CAT tool to work on your own daily jobs — wherever you got them from — and the more you do, the higher you rank on the Marketplace. (There are other factors determining your position, which are beyond the scope of this article.)

Once a customer — whether a direct client or an agency — has a job and needs linguists, they send out requests to profiles of their choice. Then, depending on the settings they chose, either the first translator to respond gets the job, or they collect several applications and decide whom they give it to. Sometimes they will also split the job between several translators — all of which happens in the same web interface, without having to send any files.

Although bid wars are not totally out of the question here, they are less common: The customers here know how the industry works and how costly a cheap translation can be. So no need to bring down your rates just for the sake of it!

Coming back to question asked in #1, Smartcat also allows you to invoice customers anywhere in the world. The customer will technically pay Smartcat, but you will be able to withdraw the amount from your balance as usual.

Phew! That was a long read, but hopefully it did make things clearer for you and will help you make a choice. As with anything, sometimes it makes sense to pick several marketplaces, but you may also prefer to double down in one — it’s up to you ?

If you reached this far, you might just as well give Smartcat a try!

Increase your earnings and get rid of routine tasks with Smartcat