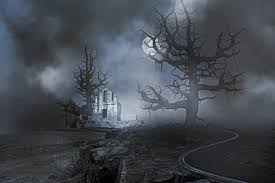 TOP 4 MOST HAUNTED PLACES AROUND WORLD

Now a days we are living in the mysterious world. Here is a list of some of the scariest places in the world.

The Bhangra Fort is a 16th century fort built in the Rajasthan state of India. The town was established during the rule of Bhagwant Das as the residence of his second son, Madho Singh. The fort and precincts are well preserved.

According to another tale a black magic priest fell in love with bhangarh princess .One day a priest proposed the princess but she refused and they killed the priest. Before he died, the priest cursed the entire village, condemning it to destruction and desolation.

This fern hill hotel was famous for Raaz (2002) Bollywood movie. This hotel construction took place in the year 1844. It was made for the maharaja of Mysore. The hotel was shut for paranormal activities, but still we didn’t knows what happened in the past that make the hotel the haunting place.

The peoples know the place was haunted because of girl who committed suicide there. One day night when the troupe was back to hotel after finishing the shoot.

They couldn’t sleep because of terrifying noise on above floor. After morning the troupe members enquired about the sound to receptionist. The reply of receptionist sent everyone in frenzy because he replied that there is no floor above their.

One more incident take place with team of Raaz When the team played the recordings they heard a girl voice in background, but while shot there wasn’t a girl.

This house located in the town of New South Wales, Australia. The homestead advertising itself as “Australia’s most haunted house”.

People have claimed to witness her body – less ghost in the window, strange voices, flickering lights and the floating ghost in the corridor.

Monte Cristo has been featured in television shows such as A Big Country in 1977, the travel show Getaway in 1992, the paranormal based reality show Scream Test in 2000, Ghost Hunters International in January 2010 and My Ghost Story in 2013.

Aradale was a psychiatric hospital that functioned from 1865 until 1998.Stories of the ghost of nurse Kerry have made it popular. The building administered lobotomies and electroshock treatments on its patients, resulting in over 13,000 deaths on the premises. Nurse Kerry is one of the notable ghost, who is believed to walk the women’s wards. Many have heard her voice and the clicking of her heels.

Some visitors have reported seeing shadow people in the halls, while others claim they’ve been scratched, bitten and pushed.

On June 10, 1912, the old white casing house at 508 E Second St turned into a horrifying crime location. The horrifying homicide of Josiah B. Moore, his better half, their 4 kids and 2 little youngsters who were for the time being visitors shaken the unassuming community of Villisca, IA, and the killer was rarely recognized. Throughout the long term, inhabitants of the home revealed dreams of a man with a hatchet, kids crying and unexplained paranormal action. In 1994, the house was reestablished to its unique condition with no indoor pipes or power. These contacts add to the chilling feel during a lamplight visit from April through November or a short-term experience accessible by booking for gatherings.

Worked in 1771, Post Mifflin is the country’s just Progressive Conflict front line that is as yet unblemished. There are 14 reestablished structures on the grounds on the Delaware Stream and supposedly a lot of spirits from an earlier time. Among the phantoms said to torment the post is a shouting lady whose cries are clearly to the point that the Philadelphia police have been called to explore, just to see as nobody there. Different characters in the neighborhood phantom stories incorporate a nondescript man meandering around the stronghold, a local escort wearing progressive clothing and various kids and canines.

The house at 716 Dauphine St is an exemplary French Quarter excellence with exemplary fashioned iron galleries and a huge yard. However, during the 1800s, this home was a place of repulsions for the King, a rich man with a corrupted way of life, various spouses and kids, and a collection of mistresses of ladies and young men held despite their desire to the contrary. Neighbors whined about the strange propensities for this man who had an inclination for celebrating, opium and torment. In any case, the best secret in the house was the King’s end, when he was covered alive in the patio after his family and collection of mistresses were hacked to pieces in a bloodbath by an obscure culprit. Today, his irate soul is believed to be liable for the uncommon commotions, noisy music and solid incense smells that drift from the home, as well as unwanted advances on past female inhabitants who swear the Ruler is still up to his old stunts of grabbing female guests.