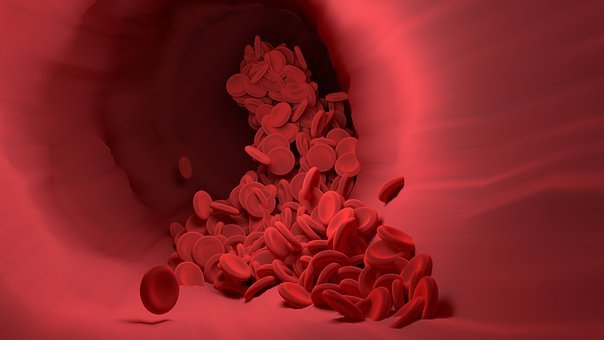 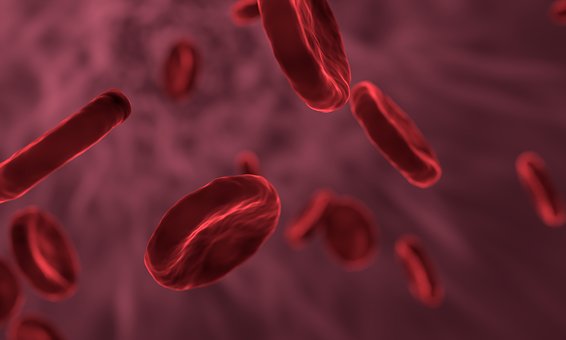 Human blood consists of cells and plasma, as plasma constitutes 55% of the blood volume, and it is a yellow liquid. The rest is occupied by various types of blood cells, such as red and white blood cells, and platelets.

Red blood cells represent 99% of the solid components of blood, and their shape is disc-like, and they are concave on both sides, with protrusions on the top and bottom of the cell.

In contrast to many cells of the body, red blood cells do not contain a nucleus, but rather contain a hemoglobin molecule, which is of great importance to the body; It works to transfer the oxygen needed for the process of building and demolishing from the lungs to the various cells of the body, as well as transferring carbon dioxide from the cells to the lungs.

These cells are characterized by the flexibility that enables them to bend easily so that they can pass through the tiny capillaries. All blood cells arise from stem cells common to each other, and these stem cells are produced mainly in the bone marrow, and later go through several stages of development, ending with the formation of red or white blood cells or mature platelets.

The production of blood cells is controlled by the release of certain types of chemical compounds; The production of red blood cells is controlled by the hormone erythropoietin, which in turn is produced by the kidneys. The body of an adult male contains about 5 million red blood cells / cubic milliliter of blood, while the adult female body contains a relatively smaller amount that may reach 4.5 million cells / cubic milliliter of blood.

The number of red blood cells varies according to the geographical location of the person, and their quantities increase, for example, in people who live in areas that are very high above sea level.

The life cycle of a red blood cell extends to approximately 120 days, when it grows old, or if it is damaged, it is destroyed in the bone marrow, liver or spleen. The body is important, as it performs many functions, and its main function is to transport oxygen; At first, the red blood cells in the tiny capillaries in the lungs take oxygen from the air, and then transport it through the bloodstream to all cells of the body, as the cells need it to carry out the process of building and demolishing.

This process results in several waste products, including carbon dioxide, which red blood cells also transport to the lungs, by secreting the enzyme carbonic anhydrase. Red blood cells also supply the various cells of the body with nutrients and essential compounds, and transport their waste to the liver. One of its functions is also to control the acidity level of the blood, or the so-called pH; It acts as a regulator of the acid-base balance in the blood. 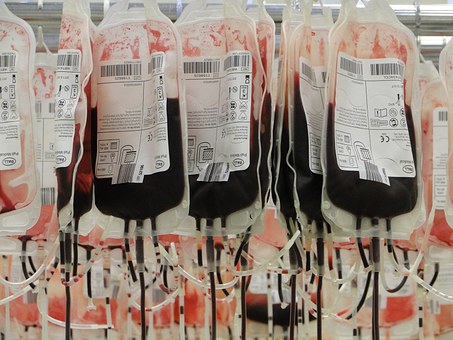 Diseases that may affect red blood cells There are many imbalances that may occur to red blood cells, including what results from pathological conditions, or from a lack of vitamins, such as vitamin B12, folic acid, and iron, and some of them are a result of hereditary diseases.

One of the most prominent diseases of red blood cells is the so-called anemia, in which the numbers of these cells are few, which leads to a disruption in the supply of oxygen to the cells of the body.

This disease may also affect the shape and size of red blood cells, according to the type of anemia; Its shape may be either normal or abnormal, and it may be larger or smaller than its normal size.

An anemic patient may suffer from many symptoms, such as feeling very tired and tired, pale skin, irregular heartbeat or heart failure. In severe cases.

As for children, it may lead to a developmental disorder compared to healthy children.

The most common types of anemia are as follows:

Iron is necessary for making red blood cells, and it is the most common type of anemia.

It may result from several reasons, some of which are related to a lack of iron intake in food, including what arises as a result of sudden bleeding, or from suffering from chronic bleeding, or it may be the result of an imbalance in iron absorption in the body. Sickle-cell anemia: It is a genetic disease in which the shape of red blood cells is disturbed and becomes like a sickle or like a half-moon, which causes them to lose their flexibility, and make them more viscous, making it difficult to pass through the blood vessels, leading to blockage of the bloodstream. This blockage may result in many complications, such as acute or chronic pain, in addition to an increased tissue susceptibility to infection, as well as death of the affected organs or tissues. Sickle cells die in a much shorter period than normal cells; That is, within about 10-20 days. Anemia resulting from chronic diseases: such as kidney disease, cancerous tumors, rheumatoid arthritis, and others.

Despite the small number of these diseases, their shape and size are normal.

This type occurs due to the destruction of red blood cells as a result of an abnormal process, before they complete their life span.

Thus, the number of red blood cells decreases, and the bone marrow cannot compensate for this deficiency. There are other cases that cause an increase in the numbers of red blood cells, such as taking steroids, carbon monoxide poisoning, or suffering from congenital heart disorders, as well as the use of erythropoietin injections by athletes to improve their performance, in addition to dehydration, and some disease conditions as well.

These reasons lead to an increase in the kidneys secretion of the hormone erythropoietin, thus increasing the production of red blood cells in the bone marrow, but the oxygen carrying capacity of red blood cells decreases in these cases.