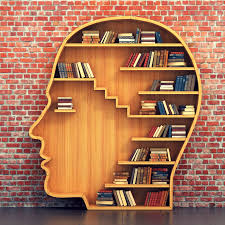 I recently had a strange and disturbing experience. The family home in which my wife and I lived before we divorced five years ago contained a large number of my books. Last week the house was finally sold and I had to take the books away. But I had nowhere to put them, so I temporarily put them in the basement of the block of flats where I live now. I was going away for a week and didn’t have time to store them properly, but I thought they were safe. Who steals books?

When I returned from vacation, the books were gone.

I was in a state of panic and confusion. I don’t see why anyone would want my old books – they were mainly paperbacks, nothing of value to anyone else – and their resale value would be zero. But after searching for two days, the books were still missing and I had no idea where they had gone.

I felt like I had lost a big piece of myself – my mind, my soul, my memories. Maybe it’s melodramatic – I’m used to losing things because I have ADHD – but this was different. The fact that I wasn’t even sure what the books were—I didn’t have time to look them up—made it worse, like a chunk of my core memory had been amputated.

On the third day I got a call from someone with a strong European accent. Spanish? He said he took all my books and put them in the car because he thought they were being thrown away. I didn’t bother questioning why on earth he wanted all those battered old books – I was just too happy to have them back. He said he would return them to where he found them, and he kept his word.

I hauled the books up to the top floor apartment, this time determined that no more misfortune would befall them, and spread them out in random piles on the floor. And there they were – books I forgot I had, books I never read, books I started and never finished, books I devoured voraciously. There was fiction, psychology, philosophy, religion. These books shaped who I became. They were, in a real sense, who I was, because they documented my obsessions, my interests, my loves.

Immediately, almost as an act of thanks, I picked up and started re-reading one of the books – “Self Consciousness” by John Updike, a wonderful collection of essays that I read when it first came out over 35 years ago. Words sparkled in me, sentences danced. I had read them before, maybe twice before, but I had forgotten so many. It was incredibly nourishing just to be able to pick up this half-discarded tome and read it again, to explore my literary past and discover diamonds.

I recently bought a new house and I’m excited to put all the books back on the shelves so they’ll make me a tattoo, a colorful collage that I can run my finger along the spines of that I can lend to my kids that I can browse and access at will. What a miracle! It is a far more satisfying sight than the fresh volumes on the bookstore walls or the good-looking books in the public library. They were MY books, all of which entered my mind to some extent, leaving pits, seeds, and flowers. Even the ones I never read showed my mark because I wanted to read them in the first place, and now I still can. It was as if a living breathing organism, Velveteen Rabbtis, had been handed back to me, all worn and torn with love. I didn’t really realize what they wanted to be until they were almost gone.

I don’t care about my books. They are scrawled, dog-eared, spotted. It makes me love them more. They are engaged, moved, crumpled, wrinkled, just like the people you love. And I will continue to treat them like strays. But now I file and stack them with more pride and happiness. When I die, if anyone who wanted to know who I was could certainly read the novels I wrote. . But they might get a better idea if they look at my libraries. This was the raw thing itself (the novel is highly processed), the raw material that produced the mind that produced the novel. And their rawness made them beautiful.

I am very glad to have my books again. I feel like I’ll never need to buy another one because there’s enough material to revisit and finish and even get into to keep me going for years. They are my vicarious soul and the mirror in which I reflect myself. I will never be so careless with them again. Financially worthless, they are still rarer than family photographs, which are external things, while books are the inner monologues of a single mind, an arrangement of symbols, facts and ideas that an internet search can never remotely match. extensive. They are my books. they are me I will never let them go again.